At least one in five Indian children under the age of five are wasted, which means they have extremely low weight for their height, reflecting acute under-nutrition, according to the Global Hunger Index 2018. The only country with a higher prevalence of child wasting is the war-torn nation of South Sudan, says the report, which was released on Thursday.

Overall, India has been ranked at 103 out of 119 countries in the Index, with hunger levels in the country categorised as “serious”. India’s ranking has dropped three places from last year, although the Index says its results are not accurately comparable from year to year and instead provides a few reference years for comparable data. The 2018 scores reflect data from 2013-2017.

Four main indicators are used to calculate hunger levels in the report, which is a peer-reviewed publication released annually by Welthungerhilfe and Concern Worldwide. (The International Food Policy Research Institute was also involved with the publication until this year.)

The first indicator is undernourishment, which is the share of the population which is undernourished and reflects insufficient caloric intake. The next three indicators use data for children under five: child wasting (low weight for height), reflecting acute under-nutrition; child stunting (low height for age), reflecting chronic under-nutrition; and child mortality. 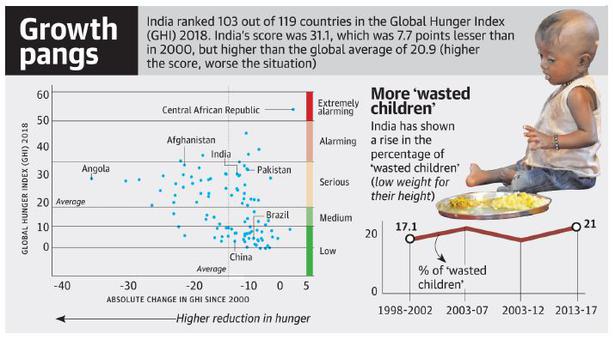 India has shown improvement in three of the indicators over the comparable reference years. The percentage of undernourished people in the population has dropped from 18.2% in 2000 to 14.8% in 2018. The child mortality rate has halved from 9.2% to 4.3%, while child stunting has dropped from 54.2% to 38.4% over the same period.

Child wasting is high across South Asia, constituting a “critical public health emergency”, according to UN organisations. The report notes that wasting rates are highest for infants aged 0 to 5 months, suggesting that attention to birth outcomes and breastfeeding is important.

Also, child wasting in the region is associated with a low maternal body mass index, suggesting the need for a focus on the nutritional status of the mother during pregnancy.

The report notes that in South Asia, “maternal BMI and access to improved water and sanitation are more closely associated with rates of child wasting than household wealth, suggesting that a reduction in poverty alone may not be sufficient to correct the problem…Factors that could reduce child stunting in South Asia include increased consumption of non-staple foods, access to sanitation, women’s education, access to safe water, gender equality, and national food availability.”

Globally, the level of hunger still falls into the “serious” category, despite improvement over the last two decades. The Index projects that at the current rate of progress, 50 countries will fail to reach the “low” hunger category by 2030. This puts the UN’s Sustainable Development Goal 2, which aims to end hunger by 2030, in jeopardy, says the report.

Nipah Virus: Here’s How To Keep Yourself Safe

Warning Signs Of A Heatstroke And Tips To Stay Safe!

How much Indians are crazy for BOLLYWOOD ? | Funny Reactions

8 Guaranteed Home Remedies To Get Rid Of A Stuffy Nose