Of all the five election bound states, Madhya Pradesh excites the most. BJP is not a significant factor in Mizoram and Telangana. Chhattisgarh is perceived to be less significant while a possible change of government in Rajasthan would be a routine affair, leaving electoral outcome in Madhya Pradesh as the ultimate marker of gauging people’s mood with respect to 2019.

However, popular analysis concerning the electoral mood in the state is veering around a range of factors leaving everyone perplexed. In this backdrop, it is pertinent to map out four issues and four non-issues informing the contemporary political dynamics in Madhya Pradesh.

1. BSP Factor: Much has been written about the significance of BSP and its possible impact upon the electoral outcome in the state, particularly upon the Congress. Employing the data analysis of previous elections, many experts have already concluded that Congress would suffer on account of not aligning with the Dalit party which commands a five-plus per cent of transferrable Dalit vote. However, that analysis suffers from erroneous assumptions on two counts. First, as the table below shows, BSP’s vote percentage is primarily on account of contesting nearly all seats rather than having a core and committed Dalit vote bank in the state. In fact, a whopping 85% forfeited deposit seats suggests that the party neither has an organizational base nor a core and committed vote.

Secondly, even in the areas adjoining Uttar Pradesh where the party is considered to wield influence among the Jatavs, the field insight suggests that majority of Dalits in this area are veering towards Congress on account of its higher win-ability quotient. For instance, majority of the Dalit respondents in Chambal, Bundelkhand and Baghelkhand regions sharing border with Uttar Pradesh tilts towards a pro-Congress rather than pro-BSP position. For instance, Sant. Tulsiram Ravidasiya, a Jatav Dalit at Beenaji village in Sagar district, who is associated with ‘Akhil Bharatiya Ravidasiya Dharm Sangathan’, a popular religious organization with strong following among Jatav-Chamar Dalits, opined that though Mayavati is like his sister and he recognizes the respectability that BSP and her brought to his community, they would vote for Congress on account of latter’s better ability to execute their desire for change as his brethren who were employed as beedi workers have suffered on account of BJP’s demonetization that crippled the industry irreparably, rendering them miserable in the scenario of whopping price-rise.

2. Hindutva: Contrary to the popular perception that Madhya Pradesh has been the hub of Hindutva as RSS has a thick organization based in the state with a complex matrix of activism, particularly among the tribals, Hindutva is a non-issue in the ensuing assembly elections. Though there are efforts to constitute it as the dominant fault line as was obvious from Yogi Adityanath’s remark that Madhya Pradesh election is about -‘Ali vs Bajarangbali’, this articulation has few takers on ground as demographically Muslims constitute less than 7% of the state’s population while Hindus comprise 91% wherein ‘minority-majority’ framework has hardly any appeal when other pressing issues are affecting the people.

3. Vyapam: There’s hardly a speech by Congress leader that doesn’t mention Vyapam scam against BJP in general and Shivraj Singh Chauhan in particular. However, my field study indicates that the issue is already a matter of the past and majority of people in all the sub-regions are not enthused by the same. In fact, it’s the local-level corruption at the level of revenue offices and Panchayats that has a bearing upon them– an indicator of angst with strong electoral translatability. 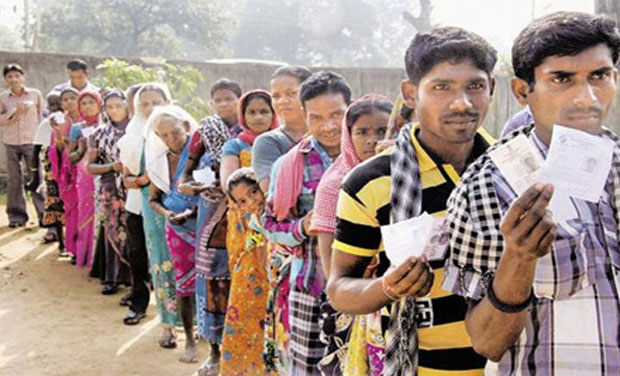 4. Sub-Region Dynamics: Dissecting political dynamics at the sub-regional levels and arguing as to why one region of a state may not necessarily have the same political trend as other is another line of explaining the electoral dynamics in the state. Many analysts, again using the past electoral data, are arguing that the populous region of Malva constituting 50 seats would favour BJP as it has been a saffron bastion and RSS has a thick organizational network here. However, my field study found a commonality of pattern in all the regions with no sub-regional exceptionalism.

1. Kisan: First and foremost, the ensuing election in the state is primarily about farmer’s angst. In all the sub-regions, Chambal-Gwalior, Bundelkhand, Baghelkhand and Mahakoshal, one finds a common resonance of farmers angst on account of whopping price rise in the inputs – irrigation cost, seeds, fertilizer and labour payment – they have to invest in farming with the low MSP they get for their crop despite the bonus given by the state government. In fact, farmers explicitly link demonetization and digital mode of payment replacing earlier cash-based one as the prime causality for their precarious position. Modi, for majority of farmers, is not the hope of aspiration anymore. Rather, his policies are seen as the prime factors contributing to the woes of the farmers.

2. Makaan: Another factor with a strong bearing on the electoral outcome happens to be the massive welfare measure that the state government meticulously used as a popular outreach program among the subaltern section of the state, mainly the tribal people and the Dalits. The scheme of housing for all of the BPL section has been invested with intensity and seems to have a corresponding electoral dividend, especially among the tribes, wherein their anger on account of price-rise seems to have neutralized to a great extent. Similarly, the customized welfare policies for women and female children also have a resonance with the beneficiaries, especially those belonging to the BPL section.

3. Mahangayi: Price-rise is another factor binding all the sections in all the regions of the state. From farmers in rural parts to lower middle class and petty businessmen in urban centres, all recognize the centrality of the issue and opine in favour of its electoral bearing. In particular, the exorbitant rise in petrol and diesel prices in general and other commodities such as agricultural equipment etc. on account of GST are cited as popular factors.

4. Anti-Incumbency: As you travel from one region to the other across the state, you couldn’t miss the undercurrent sentiment of change, even though it’s not overt. The sentiment that 15 years is good enough time to bring in change is far stronger than pro-continuity. The sentiment was summed up in a remark by Naveen Goswami, a Brahmin labourer in Udyognagar at Indore in Malwa region, ‘tawe pe roti palatni chahiye nahi to jal jayegi’ (the bread should be turned before it’s burnt). With varying degree, the same sentiment has a resonance across the state among all sections of people. The question as to why pro-change sentiment in Madhya Pradesh is not loud can be answered with a simple factor – primarily, its people desire change even though a majority of them are not sure about the organizational and leadership capabilities of the Congress. However, the same doesn’t seem to prevent them from reconsidering their electoral choice at this juncture.

Check out the reason why “Bhumi” believes that she is super...

The TRUTH behind a Tokyo restaurant serving human meat

Sonam Kapoor Gets Badly Trolled For Her Statement On #MeToo

These 18 Agreements With Israel Make Our Nation More Stronger!