Pulwama Attack Live Updates: Prime Minister Narendra Modi on Saturday warned the attackers that each drop of tear that the families of CRPF jawans have shed will be avenged. “This is the time for patience. But I assure everyone that the perpetrators will not be spared,” he said in Maharashtra. Meanwhile, Bengal chief minister Mamata Banerjee is participating in a candlelight march in Kolkata. 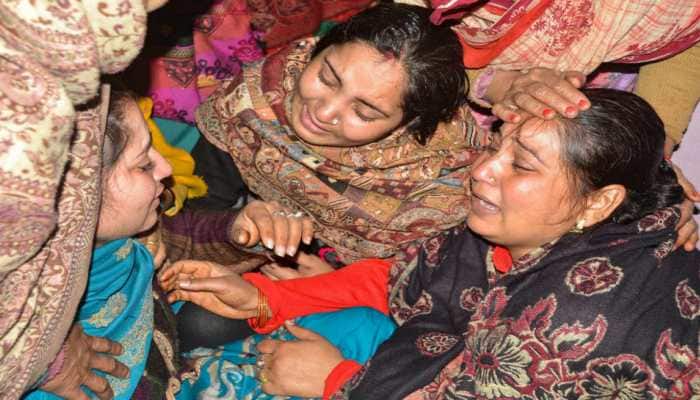 The bodies of the soldiers killed in Jammu and Kashmir’s Pulwama, which were brought to Delhi on Friday evening, have started reaching their respective hometowns one by one. Huge crowds have gathered to pay respects to the soldiers amid emotional moments.

Their anger also found resonance at the all-party meeting called by the NDA government to brief the opposition on the terror attack in Pulwama. The meeting ended with a resolution condemning the terror strike. “We stand united in solidarity with our security forces in fighting terrorism, defending India’s unity and integrity,” the resolution said. Condemning Pakistan for “actively encouraging” terrorism from across the border, the parties said India has displayed firmness and resilience in tackling it.

After the meeting, Congress leader Ghulam Nabi Azad said he told home minister Rajnath Singh to ask the Prime Minister to meet the presidents of all political parties to chart the future course of action as the “entire nation is angry right now”. He said the opposition will stand with the government to end terror in the country.

Saturday’s meeting was the first-of-its-kind called under Prime Minister Narendra Modi in the wake of a terror attack.

Prime Minister Narendra Modi, who held public meeting in Maharashtra on Saturday, said that the jawans will decide what punishment has to be dealt to the perpetrators of the Pulwama attack. He also launched a scathing attack at Pakistan without naming it and said that it had become a synonym for terrorism.

The announcement on the all-party meeting was made after the Cabinet Committee on Security meeting held on Friday, after which India withdrew the Most Favoured Nation status given to Pakistan to further restrict trade between the two neighbours. Prime Minister Narendra Modi has also warned Pakistan that it will have to pay a heavy price for the attack and said that forces have been given the full freedom to retaliate.

Pakistan-based Jaish-e-Mohammad had claimed responsibility for the attack on Thursday, soon after local youth Adil Ahmad Dar had blown up his explosive laden car near the CRPF convoy on the Srinagar-Jammu highway.

India has slammed Pakistan for stating that it had no role in the Pulwama attack, saying Islamabad could not claim that it was unaware of the presence of terror groups on its soil as the links of such outfits to the country were there for everyone to see.

“JeM has claimed responsibility for the attack. The organisation and its leadership are located in Pakistan. The Lashkar-e-Taiba (LeT) and other terror groups had welcomed the news of the attack and those groups were also based in Pakistan,” the ministry of external affairs said in a statement.

Paying tributes to two Central Reserve Police Force troopers from Maharashtra – Nitin Rathod and Sanjay Rajput from Buldhana – and others killed in the deadly attack on Thursday, Modi said the country has “complete faith and pride” in our soldiers and security forces and their sacrifices will not go in vain.

“Wherever the terror groups and the perpetrators may hide, our security forces will flush them out and punish them,” Modi said amidst cheers from the gathering of farmers and women.

PM Modi’s Savage Response To Kapil Sharma Will Amaze You!

A Question That Made Yogi Adityanath Emotional & Cry Hard

Here is The Indian Man Who Finally Cut His Nails After...

The National Girl Child Day: How Much Do You Know About...