Introduction of NOTA in Elections

• The Supreme Court in Writ Petition directed to provide a NOTA option on the EVM and ballot papers so that the electors who do not want to vote for any of the candidates can exercise their option in secrecy.

• The Supreme Court held that the provisions of Rule 49-O under which an elector not wishing to vote for any candidate had to inform the Presiding Officer about his decision, are ultra vires Article 19 of the Constitution and Section 128 of the Representation of the People Act, 1951.

• Rule 49-O was a rule in the Conduct of Elections Rules, 1961 of India, which governs elections in the country. It described the procedure to be followed when a valid voter decides not to cast his vote, and decides to record this fact.

• 49-O states that if an elector, after his electoral roll number has been duly entered in the register of voters in Form 17A and has put his signature or thumb impression thereon as required under sub-rule (1) of rule 49L, decided not to record his vote, a remark to this effect shall be made against the said entry in Form 17A by the presiding officer and the signature or thumb impression of the elector shall be obtained against such remark.

The None of The Above (NOTA) option was introduced by Election Commission of India in electronic voting machines (EVMs) in 2013 to allow voters to signal their discontent with candidates or the electoral process. It is largely being used by caste groups to demand better representation, according to a new research paper by Garima Goel of Kings College, London, published in the Economic and Political Weekly.

Positive Word Of Mouth!😃😃
The appreciation come pouring in.😍😍
Thank you all.😌😎#ElectionDay#VoteForNota pic.twitter.com/nBOwxHXKOi

Goel’s research finds significant regional variation in NOTA voting in India and clear clusters of NOTA votes in certain areas. Drawing on voting patterns of 20 state assembly elections between October 2013 and May 2016, she finds that proportions of NOTA votes are highest in India’s tribal belts (parts of west-central, east-central, and Northeast India) and, within these areas, NOTA voting is highest in the constituencies reserved for Scheduled Tribes (ST).

Interestingly, it may not be the tribals but the non-tribal population who are driving NOTA voting as a form of protest against the lack of representation for their community.

The author cites anecdotal evidence from Maharashtra’s Gadchiroli district and Chhattisgarh’s Bastar where Other Backward Classes explicitly rejected ST candidates, demanding better representation of their own community. The author also finds that NOTA voting is the highest in areas which are strongholds of left-wing extremism, possibly because of the influence of Maoists, who see it as a tactic to discredit the state.

Initially, NOTA voting had been expected to be more prevalent in urban and more literate areas, and correlated with higher turnout and increased criminality. However, the author finds that this is not the case.

NOTA voting is actually higher in rural areas with fewer literate voters, suggesting that mistakes due to ignorance could be driving NOTA votes. There is also no strong association between NOTA voting with either higher voter turnout or increased criminality in elections.

While overall NOTA voting only accounts for 1 to 3% of total votes, it still offers insights into the motivations of ordinary voters in India. For voters, NOTA can be a tool for protest and, for candidates in close contests, it provides an opportunity to gain a marginal voter share by addressing demands of NOTA voters.

• Positive features in NOTA:
a) Voter’s participation is an essence of democracy. Introducing a NOTA button can increase the public participation in an electoral process.
b) NOTA option gives the voter the right to express his disapproval with the kind of candidates that are being put up by the political parties.
c) For democracy to survive, it is essential that the best available men should be chosen as people’s representatives for proper governance of the country. Thus in a vibrant democracy, the voter must be given an opportunity to choose ‘None of the Above’ (NOTA) button, which will indeed compel the political parties to nominate a sound candidate. This situation palpably tells us the dire need of negative voting.

• Negative features in NOTA:
a) As per the provisions of clause (a) of Rule 64 of Conduct of Elections Rules, 1961, read with Section 65 of the Representation of the People Act, 1951, the candidate who has polled the largest number of valid votes is to be declared elected by the Returning Officer. NOTA do not mean rejection. That may sound self-defeating to the whole point of NOTA but according to Indian democracy the rule of first past the post is declared the winner. Thus, if out of total 10,000 votes, 9999 voters elect NOTA option and just one candidate gets even a single vote, then the latter wins from that constituency. 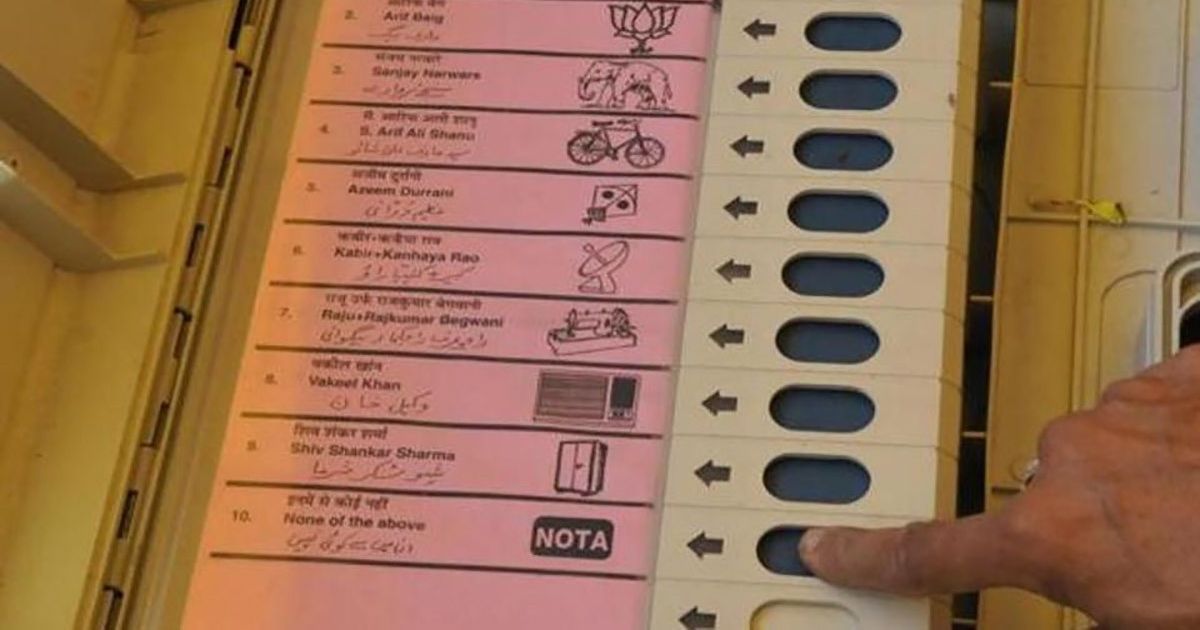 • NOTA can only work only when it is paired with Right To Recall option where voters can recall candidates they have elected. This will instill fear in candidates to do well in office and also lead to giving NOTA importance because it acts as a pre-cursor to public displeasure. Currently, Right To Recall does not exist in the electoral process in the country, which only weakens NOTA.

Who is Mirabai Chanu ? She is Recommended for India’s Highest...

Aishwarya Rai Bachchan- Here the reason why she is the most...

Sweta Mangal- The women who works efficiently for Medical And Educational...

Babar Ali was nine when he realize that there is lot...