Panchayati Raj is the system of local self government for villages. Because Panchayats are an effective vehicle for people’s participation in administration, planning and democratic process, organisation of village Panchayats has been made a Directive Principle of State Policy (Article 40).Rural India has seen such Panchayats for ages. The new Panchayats are an improvement over the old ones in uniformity, institutional structure and states support.

The present day Panchayati Raj system was introduced in 1959 on the recommendations of the Balwant Rai Mehta Committee. The committee had been set up in 1956 primarily to suggest measures for improvement in the working of the Community Development Programme and the National Extension Service which were being implemented at that time.

It recommended a three-tier Panchayati Raj system for proper implementation of the Community Development Council and the Union Government accepted the recommendations of the committee but gave the responsibility of implementing them to the states Governments. For one reason or the other, the implementation was slow and unsatisfactory.

Constitutional decentralization of power to include a third tier of governance. But the ground level change has been dismal and devolution still remains farfetched.

The 73 rd Amendment (together with the 74th) is rightly called ‘a silent revolution’ for various reasons. First of all, the PRIs no longer operate at the whim of state governments and their laws.

(a)They are now a part of the Constitution and enjoy the status of institutions of self-government, as parliament at the federal level and legislative assemblies at the state level.

The amendment prescribes regular elections every five years and election within six months of the dissolution of any PRI.
(a)  To ensure free, fair, and timely elections there is a provision for the setting up of state election commission.

The most revolutionary provision is the reservation of one-third of the seats for women in local bodies, along with    reservation of seats for scheduled castes and scheduled tribes in proportion to their regional populations. The amendment lays down 29 functions to be entrusted to the PRIs.

To maintain a democratic ethos, popular accountability, and transparency, the amendment emphases the need for periodic meetings of the gram sabha, composed of all adults in each village. These meetings will approve ongoing programmes and financial allocations.

In brief, the amendment visualises the allocation of funds, functions, and functionaries to these bodies to ensure genuine and effective democratic decentralisation.

The establishment in every state (except those with populations below 2 million) of panchayats at the village, intermediate and district levels (Article 243B)

• If a panchayat is dissolved prematurely, elections must be held within six months, with the newly elected members serving the remainder of the five year term (Article 243E).

• Reservation of seats in all panchayats at all levels for SC/ST (Article 243D).

• Reservation of one—third of all seats in all panchayats at all levels for women, with the reservation for women applying to the seats reserved for SC/STs (Article 243D).

Following are the discretionary provisions

•   Transfer of powers and functions to Gram Sabha.

•   Mode of election of chairperson of a panchayat at village level.

•   To decide the taxes, duties, tolls and fees for which a panchayat shall be authorised.

•   To make provision for maintenance of accounts and auditing of panchayats. 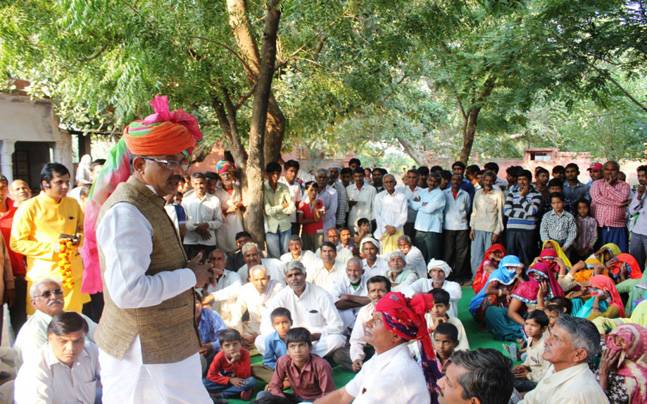 • Panchayati Raj is a three-tier structure of democratic institutions at district, block and village levels namely, Zila Prishad, Panchayat Samiti and Village Panchayats respectively; is a system of local self government aimed at securing gramswaraj; is based on the philosophy of decentralization ; enables pail participative governance; is a suitable institutional arrangement for achieving rural development through people’s initiative.

• Panchayats as local self government institutions and vehicles of development have been part of the Indian system of governance since ancient times.

• It set out general principles for development of local institutions in the future and Provided the rationale behind functions of local bodies.

Chocolate Day:Make your relationship sweeter with the help of a box...

Here’s How To Make Crispy French Fries Like Mcdonalds

Remember Semen Filled Balloon Thrown At LSR Girl? This Was The...

From Lal Qila Nehru was telling that we are Free, Where...

Arshi Khan is Doing Film With Bahubali Prabhas? Here is The...

Top 5 Best Places In India To Celebrate The Festival Of...

Indigo flight evacuated in Patna after smoke was seen