If the sports ministry accepts the committee’s recommendations, then Kohli will be the third cricketer after Sachin Tendulkar (1997) and former captain Mahendra Singh Dhoni (2007) to receive the award.

“Yes, Virat Kohli and Mirabai Chanu’s names have been recommended by the awards committee,” an official told IANS on condition of anonymity.

Among others, star javelin thrower Neeraj Chopra, who clinched a gold medal at the 2018 Asian Games, has been nominated for the Arjuna Award.

#1 Saikhom Mirabai Chanu was born on 8 August 1994 in Imphal East, Manipur, India. She did not have a weightlifting centre in her village during her childhood days, and had to travel 60km to train. She is a prodigious talent who began weightlifting in 2007 at Khuman Lampak Sports Complex in Imphal, India

#2 She has been a consistent performer right from her junior days. She was awarded the title of Best Lifter at the 2013 Junior National Championship in Guwahati, India.

#3 She had clinched the gold medal at the 2011 International Youth Championship, and another at the South Asian Junior Games. It was her phenomenal performances in these competitions that caught the eye of the officials, who undoubtedly considered her to be the athlete to watch out for in the future. 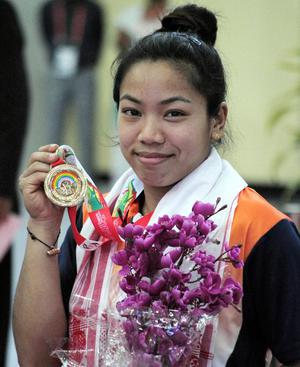 #4 She had represented India at the 2014 Commonwealth Games in Glasgow, where she showed some excellent performances on her journey to clinch the silver medal in the women’s 48kg class by lifting a total of 170kgs.

#5 She considers Kunjarani Devi to be her inspiration, and looks up to her when it comes to the art of weightlifting.

Before Virat and Anushka here are 5 Bollywood actresses who married...

Watch ! When Virat Kohli could not believe his eyes for...